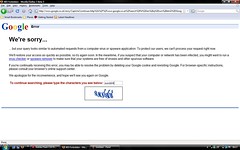 For those of you who don’t know: Google periodically cleans house in their AdWords program. They single out websites and assign them a poor “quality score”. These sites hit by this bad score have their minimum bid prices skyrocket to $5 or $10 per click. This effectively bans you from AdWords since most webmasters cannot afford to pay $10 for every click Google sends their way.

These rounds of quality score updates have affectionately been called the “Google Slap” by those in the Internet Marketing community. Not even the big spenders in AdWords are immune from the Google Slap. I’ve personally had campaigns that spent six figures every month with Google get slapped and go from $150,000+ in monthly spending to nothing. So they don’t seem to mind offending big advertisers.

Over the past day or so there’s a whole new round of Google Slaps hitting many sites. This is round 4 of the Google Slap. Webmasters, marketers and business owners everywhere woke up this morning finding their bids jacked up from pennies to $10. The people who relied upon AdWords as their biggest source of traffic are essentially out of business overnight.

I’ve heard rumors that in some cases Google Slapped so many sites this time that some major keywords actually have no advertisers running at all. I’ve seen several of the markets I’m advertising in get thinned out where there were dozens of advertisers last week and now there are less than 10.

I completely understand Google’s desire to have quality listings in the AdWords program, but the problem I have is that Google sure seems inconsistent and arbitrary in the way they apply the quality score. I’ve seen horrible sites survive the Slap and keep running fine while at the same time quality sites get hit hard. I even have a campaign I manage that ranks in the top 4 organic search results for all its major keywords. It’s a 10 year old site and is an authority in its market. However, Google has slapped it and refuses to adjust its poor quality score. So they’ll send free traffic from their organic search results, but will not let me pay them to be in AdWords.

Another problem with the Google Slap is, in some cases, once you’re slapped you can’t fix it. You might as well throw away your domain name and start all over.

That’s why I always advise that anyone who wants to use Google AdWords to study up on it completely before doing anything. I don’t mean a casual study either. You must understand all aspects of using Google AdWords; Including their Landing Page & Site Quality Guidelines, the Google Webmaster Guidelines and how to make your site generate sales effectively. Otherwise you’re likely throwing money out the window while risking being slapped permanently.

Now to top things off, Google accidentally uploaded the future version of their terms of use. This was a mistake and they quickly pulled it down, but not before some clever webmasters had a look at what’s coming in the future. Google is apparently going to keep track of how well the server your website is on runs. If it runs to slow for Google’s liking, they’ll slap you!

I’ll cover more on this one within the next day or two.

4 thoughts on “Google AdWords VS Webmasters: Google Slap Round 4”