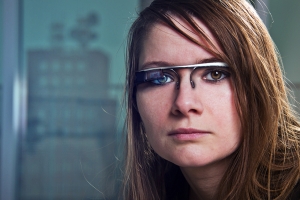 In case you didn’t know, Google is coming out with a wearable computer that will be available for purchase later this year or early next year. These Google glasses allow you to take photos, record video, use voice commands and lots of other stuff – all while you’re wearing the head-mounted-display (HMD) on your noggin. Is Google Glass the future of technology or is it a fad? Let’s take a look at the capabilities of this amazing new Google device and what we can expect when the technology finally becomes available for public use.

Google Glasses – What Are They?

Google glasses aren’t really glasses, at least not yet. The tech giant is working on putting the technology in sunglass, prescription and even contact lenses. For right now, the device looks like a band that’s worn around the head with a tiny lens that is placed above the right eye.

Wearers will see a virtual display where they can take photos, record video, check the weather, read email or anything else. The Google glasses include an embedded camera, microphone, GPS and even use bone induction to provide sound.

To control the Google Glass device, users will use voice commands. Saying, “Ok, glass,” for example, will bring up an options menu where users can send a message using mere speech text or ‘hang out’ with friends. They can also talk to people over web cam, stream to others what they are seeing at the moment and they can identify friends in a crowd (as long as they have the right app).

All of these capabilities point to the greatest innovation to hit the tech world since the iPhone. Will Google glasses catch on, however, or are they a fad?

Wearable Computing – Not A New Technology

For one thing, we know that the technology is nothing new. Wearable technology has been around for a long time. Many readers may remember calculator watches. And it turns out that Google is working on a bendable version of the iPhone that can be worn as a watch. What about head-mounted-displays like Google Glass?

Paul Travers, CEO of Vuzix, which has been attempting to break into the market with wearable computing since 1997, recently told Mashable, “Generally speaking, no company has solved all of the problems to do this really well yet. Addressing the mass market is even more difficult because users are very particular about what they wear and they have high expectations for the products they use.”

Travers is of course referring to the fact that no company has made wearable computing functional and cool, two very important ingredients if the technology is going to become ubiquitous as Google hopes it will.

The Controversy Begins – Even Before Google Glass Is Released

While Google attempts to make the head-mounted Google Glasses fashionable and functional, they may also want to work on making the devices socially acceptable. The media has already published several accounts of bar owners, strip club owners and other business owners who don’t want Google glasses or any derivatives on their property.

The devices haven’t even hit store shelves yet and there are already Google glasses etiquette rules coming out. One of the Explorer program testers for the Google Glass devices, Noble Ackerson, came up with a set of rules of etiquette for wearing them. Ackerman and the other testers were able to secure an early test pair of the Google glasses for $1500 for the purpose of beta testing, debugging and for coming up with ideas to help make the glasses more socially acceptable.

Ackerman’s etiquette list includes tidbits like don’t use them in the locker room or shower, don’t video tape your spouse during a heated dispute, don’t wear them in venues that aren’t ‘Google Glass’ friendly, such as movie theaters, and always explain the glasses to and educate strangers. Don’t do or say anything that will induce or exacerbate paranoia.

It will be interesting to see if Google glasses will take off or if they’ll go the way of wearable calculators and other tech. We may see a future where everyone wears Google Glass and where it’s mandatory to have it at work. Or the technology may fizzle the moment it comes out. One thing’s for sure, Google never ceases to innovate or amaze.